Press enter to begin your search

Whatever happened to “joined up thinking”?

It’s strange how a random sequence of events come together to trigger a flood of thoughts and, in this instance, a cataract of anger and incomprehension. 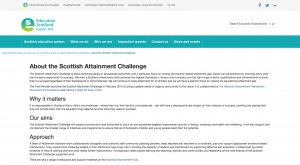 My sequence may seem especially random. It includes the White Paper on education – although I feel that I am overly dignifying the recent White Paper by maintaining the link with education as it manages, at the same time to be about much more and much less than that. It also includes the ongoing announcements about the Scottish Attainment Challenge, a visit to Raploch in Stirling, the 20th anniversary of the Dunblane Massacre, Uncle Ernest’s speech at his 90th birthday party and a google search on Professor Stewart Asquith. If you’ve managed to make the connection already, a prize is on its way!

The White Paper set out the commitment to forced academisation for all schools by 2020. The argument was supported in some shockingly stumbling interviews – stand up Nick Gibb, your Newsnight performance was the prime example – and a series of inept presentations. The rationale for this sweeping move appeared to be that some academies had done well and therefore all schools should follow their lead. Interestingly Nick Gibb added a new twist – schools that were improving and weren’t academies should be forced into multi-academy trusts so that they could play their full part in improving other schools.

There is so much to argue about here, but the issue that I will focus on is the isolation of academies, be they part of Multi-academy trusts or not. Schools can make a difference through raising young people’s attainment beyond that which might be predicted for them on the basis of their personal circumstances and prior performance, but there is very little evidence that they can make all the difference.

This is where Uncle Ernest’s speech comes in. He and his sister came from a background of rural poverty brought up by a single parent. Both benefitted from the good schools. He became particularly successful, a first in Chemistry, a PHD, an impressive career and a number of patents to his name. He is the epitome of the social mobility that the government seeks, but he would never have been able to go to University without free tuition and the provision of grants. His mother could not have contemplated the sort of debt that so many students now face. Even if, by some miracle, she had, she would never have been able to support his sister who became a teacher. For them attainment would not have been enough. They needed that element of joined up thinking, that it was once so fashionable to refer to.

The reality is that we are not generating many, if any, more stories like Ernest’s through either academisation or school improvement. That is the thinking behind the Scottish Attainment Challenge – we need to raise the bar and close the attainment gap. It inevitably makes teachers the shock troops in the war on inequality as if they could suddenly do what they have been trying to do for years without significant success. There is some evidence of joined up thinking. Scottish Government have  received a report on widening access to higher and further education and there is central support through an Attainment Hub and there are some new diagrams and infographics, but is that enough?

That is where Stewart Asquith’s story came in. The son of a cinema usherette, also a single parent, he also attained remarkable academic success before devoting his life to making a difference for children. That difference came through children’s rights alongside a focus on child care and family support. He knew the importance of that for children unsure of their identity and their place in the world. He understood the need for support beyond schools. One wonders if our politicians as have the same clarity about how we confound destiny for children whose lives are blighted.

I hesitate to introduce reference to the Dunblane massacre because the events involved were so extreme, traumatic and tragic, but reading Gordon Jeyes’ article in the Times Educational Supplement overcomes that hesitation. Reacting to the events, dealing with the welter of issues raised by them, trying to support those most affected and to recover some form of normality was a huge challenge. Gordon’s article is very clear that the response required services to be drawn together not pulled apart. It was collaboration, cooperation and “joined up thinking” that achieved the progress that was made. How would that be achieved in the fragmented world of academisation?

We appear to be moving way from “getting it right for every child”, an approach based on integration recognising the contribution of all agencies, to one where schools and attainment are seen as the keys to equity.

The grace note is the visit to Raploch, an area of Stirling where the Council mobilised its resources and formed wider partnerships to regenerate schools, Further Education provision, housing, health facilities, employment prospects, the wider environment and culture to enhance life chances for the whole community. I need to go back again to look at the impact, but watching the Big Noise Orchestra from Raploch launch the Cultural Olympiad in 2012 gave me considerable grounds for hope. I believe it would now be more difficult to make that sort of intervention in Scotland now and impossible to do so in England. That defies my understanding and makes me angry.

Redefining Potential – getting beyond the walls

Redefining Potential – getting beyond the walls

We use cookies to ensure that we give you the best experience on our website. If you continue to use this site we will assume that you are happy with it.OkRead more